Star clusters Megaclusters is the first slot to include Big Time Gaming’s new and highly entertaining gaming mechanic Megaclusters™. If you thought that the grid and cluster pays slots that you had played before were technically sound and entertaining, then be prepared to be blown away as this new engine is set to eclipse anything that has come before it. Experience dazzling visuals and audio delights with the thrill of cascading reels, multipliers, free spins and re-triggers, as BTG catapult us out of the stratosphere in this new and exciting slot.

Check out all our other Megaclusters reviews.

New customers only. Min deposit of £10 required. Wagering requirement is 45x bonus amount. 100% up to £100 on 1st deposit. 50% up to £200 on 2nd deposit. When playing with bonus funds maximum bet is £5. Welcome bonus is excluded for deposits with Skrill/Neteller. T&C’s Apply 18+ BeGambleAware.org.

There’s a hint of BTG’s Starquest Megaways™ to the theme of Star Clusters Megaclusters™,
as the reels resemble something that you could associate with a control panel on a futuristic spaceship. Factor that in with the effect of you travelling through time as the background colours flash by, and the scene is set perfectly for a voyage into the world of Megaclusters™ entertainment.

Fans of Big Time Gaming will recognise sound effects throughout the game that are used on various BTG slots for big wins and exploding symbols. But without a doubt one of the jewels in the crown of Starclusters is the soundtrack to the game and the various soundbites that have been added throughout it. We highly recommend where possible that you play the game whilst wearing headphones, this gives you the opportunity to hear as many of these soundbites as possible. So far we’ve picked out The Simpsons, Metal Gear Solid, Star Wars, Slot Streamers and Street Fighter.

What does Star Clusters Pay?

Star Clusters uses coloured gems throughout the game to award you with wins, and the bigger the clusters that you can achieve the more substantial the wins will be. You’re going to need at least 5 matching symbols that appear adjacent to each other anywhere on the grid to achieve a win, with pays ranging from 0.1x for a cluster of 5 symbols, up to 50x for a cluster of 25+ symbols.

Two wild symbols appear throughout the game which are both stars. The standard wild will substitute for all other paying symbols and aid you in the creation of bigger and better clusters.

Two key factors to take note of are that firstly all multiplier values will reset to x1 after any series of wins has taken place, ended, and a new spin is initiated. Secondly any multiplier values that have been created will be carried over into the bonus round if the feature is triggered. 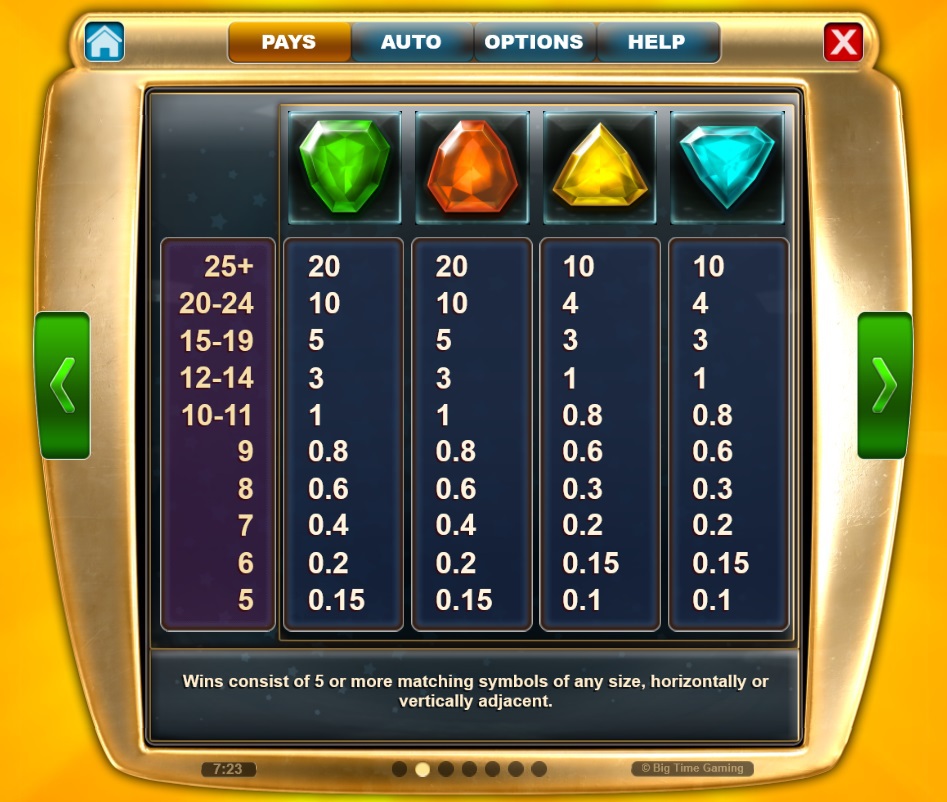 HOW TO PLAY STAR CLUSTERS

The action on Star Clusters starts out on a reel set that is 4×4 in size with a total of 16 Megaclusters™ in play. The amount of active Megaclusters during your game play can be viewed at the bottom of the reels throughout if you would like to keep a track of it.

New outer dimensions are unlocked on Star Clusters whenever a win is created in the base game. Symbols that form part of a winning cluster will split into 4 smaller symbols, this will further increase win potential as more Megaclusters™ will be active, with up to a maximum of 64 Megaclusters™ being available to trigger during normal play.

Additional action takes place on Star Clusters through the cascading reels mechanic. This will come into play once the smaller symbols have been activated on the game reels. Whenever winning clusters are made through these smaller symbols they will explode and be removed from the grid, new symbols will then fall down to replace them.

Reel cascades can keep taking place until it is no longer possible to create a winning cluster of symbols. At this point the slot will return to its original format and a new spin will need to be initiated.

The free spin bonus round on Star Clusters is where the Megaclusters™ mechanic really begins to flex its muscles and show exactly what it is capable of, but first of course you will need to trigger the bonus round.

Whilst some slots opt for scatter symbols to trigger the bonus feature, Star Clusters uses a method whereby 5 or more consecutive winning actions in the base game will bring around the free spin feature. For a basic 5 action trigger you will be awarded 2 free spins, with each subsequent action adding one extra spin to your starting total.

Brace yourself for some out of this world bonus action once the free spin feature initiates on Star Clusters. The grid will expand to a massive 8 x 8 format and begin with 64 Megaclusters™ already in play.

Hitting a winning cluster of symbols will again see each individual symbol that is a part of that win split into 4 smaller symbols. This can potentially lead to a colossal grid of gems that can total a maximum of 256 Megaclusters.

Once the symbols have been split into smaller gems they will behave in the same manner as they did in the base game. This will see them explode and be replaced with new symbols via a reel cascade in all further wins that they are a part of.

Even with all of these ways to win it’s still not time to put away the spacesuit just yet. The gold wild multiplier is yet to have its say and this can prove to me the make or break symbol of the entire bonus round.

A couple of important details to note are that firstly during the free spin bonus the gold wild multiplier will not reset back to x1 after each spin. Finally, you should keep a look out for 2 multiplying wilds appearing in the same cluster, as they will multiply each other before they multiply the win.

Star Clusters will likely go down in folklore as it is the first game to feature the Megaclusters™ mechanic. You can see the intricate detail that has gone into the creation of both slot and gaming engine, with player satisfaction and win potential high on the list of priorities it would seem.

BTG continue to set themselves the highest of standards with Star Clusters setting the bench mark for what we can expect to see within this new niche of slots. These are extremely exciting times in the world of igaming, and we are on the edge of our seats in anticipation of seeing where Big Time Gaming takes us on the next part of their Megaclusters™ journey.